Thailand is a Southeast Asian country. It's known for tropical beaches, opulent royal palaces, ancient ruins, and ornate temples displaying figures of Buddha. In Bangkok, the capital, an ultramodern cityscape rises next to quiet canalside communities and the iconic temples of Wat Arun, Wat Pho, and the Emerald Buddha Temple (Wat Phra Kaew). Nearby beach resorts include bustling Pattaya and fashionable Hua Hin. 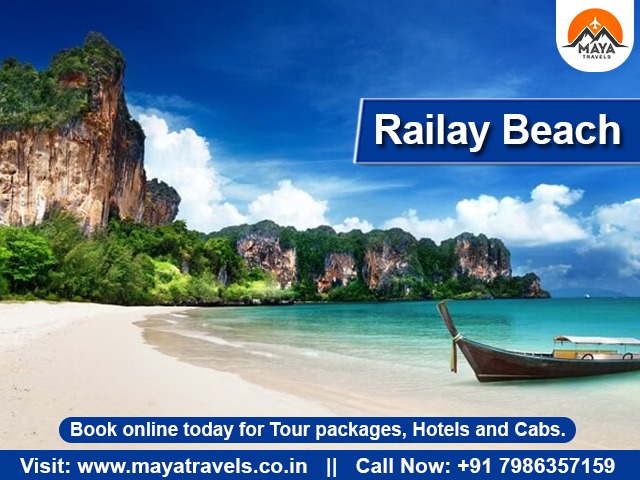 Krabi province is home to some of Thailand's most famous beach destinations–and Railay tops the list as one of the most stunning. Considered by many as one of the best beaches in the country, Railay delivers on promises of white sand, turquoise-blue water, and the feeling that you've found a slice of paradise even before your feet touch the sand. 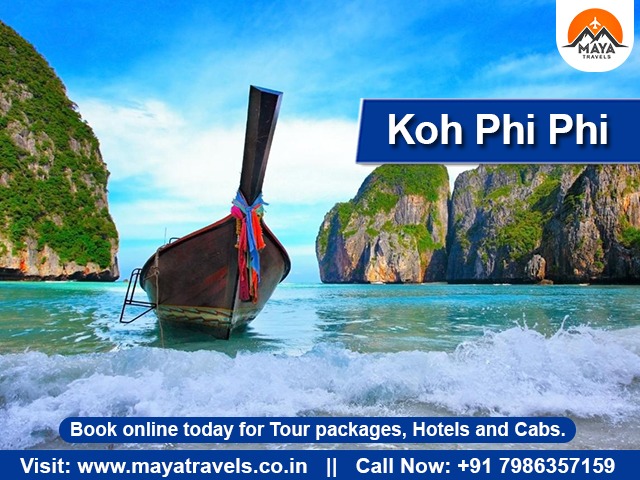 The Phi Phi Islands are one of Thailand's most popular resort areas for a reason–the clear blue waters, the soft sand, and the breathtaking views that go on forever.

You can reach Phi Phi Don–the largest of the islands and the only one permanently inhabited–on a rented kayak or by hiring a small wooden boat to take you here. 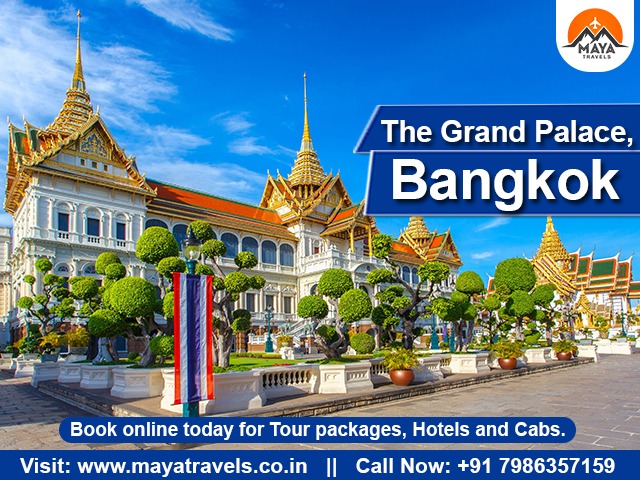 Even if your plans for Thailand mainly involve frolicking on a beach and eating as much Massaman curry and pad Thai as humanly possible, you'll probably spend at least a day or two in Bangkok. There are plenty of things to see and do in the capital, but the Grand Palace should definitely be at the top of your list. This is the number one sightseeing attraction in the city, and it's staggering in both historical significance and craftsmanship. 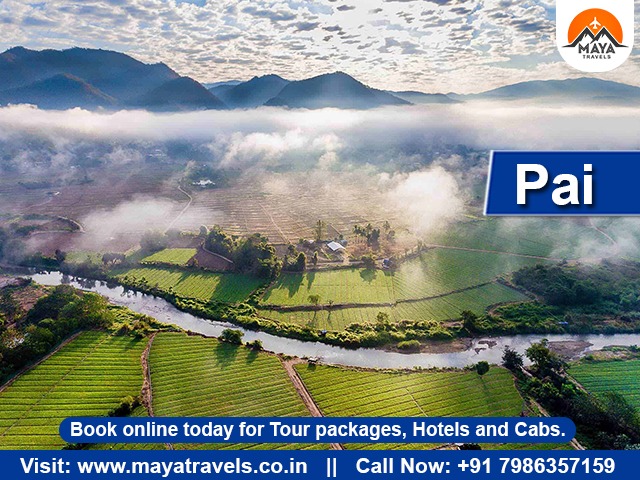 Thailand's reputation as a country of beautiful landscapes and friendly people is due largely to the world-renowned southern beaches. Because of this, most people don't realize that the vast north is also home to entirely different but equally breathtaking places to visit.

Northern Thailand, particularly the western region near the Burmese border, is marked by mountainous jungle terrain that is both rugged and beautiful. Pai, in Mae Hong Son province, is the perfect starting point from which to enjoy the country's natural beauty, as well as the famed Thai hospitality and cooking. 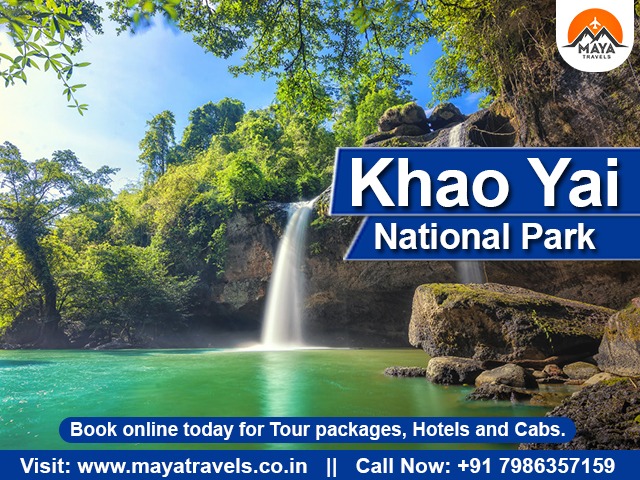 Khao Yai National Park is Thailand's oldest national park and still one of the most popular because of its large population of wild elephants. Covering an area of just under 2,000 square kilometers, this breathtaking park is home to rainforests, mountains, and grasslands. This variety of terrain means an equally rich fauna, with gibbons, jackals, and even bears calling the park home. Haew Suwat Waterfall, famous for a scene in Leonardo DiCaprio's The Beach movie, can be accessed on foot when hiking the park. 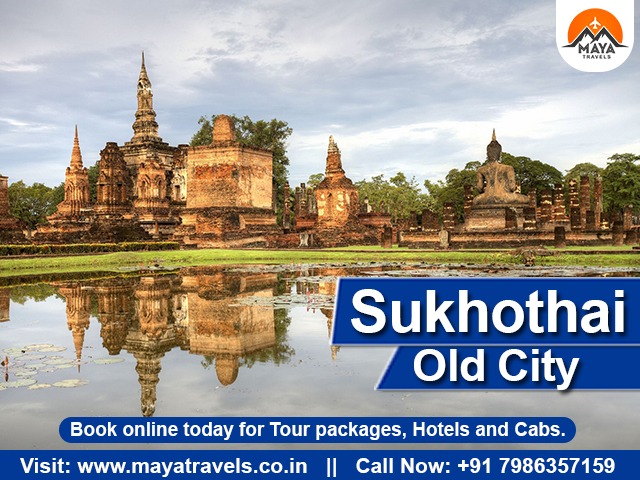 A favorite stop for history buffs and photography enthusiasts, Sukhothai offers many lovely photo ops at a smaller scale than Ayutthaya. The ruins of this old city still stand proud despite enduring centuries of battle and exposure to the elements. Sukhothai's Old City is a UNESCO World Heritage site, and much has been invested to restore and preserve one of Thailand's most significant historical sites.

Ayutthaya offers a magnificent peek into the glory of ancient Thailand, where visitors can wander the haunting but romantic ruins of the former capital.

Ayutthaya was once the most important city in Thailand, and the old palaces and temples stand as a testament to this. Over a hundred wats, chedis (Thai-style stupas), prangs, and thousands of Buddha statues are spread around the park. Some sights – like the temple that houses the 12-meter-long reclining Buddha and the tree roots embracing a Buddha's head – are particularly stunning and not to be missed. 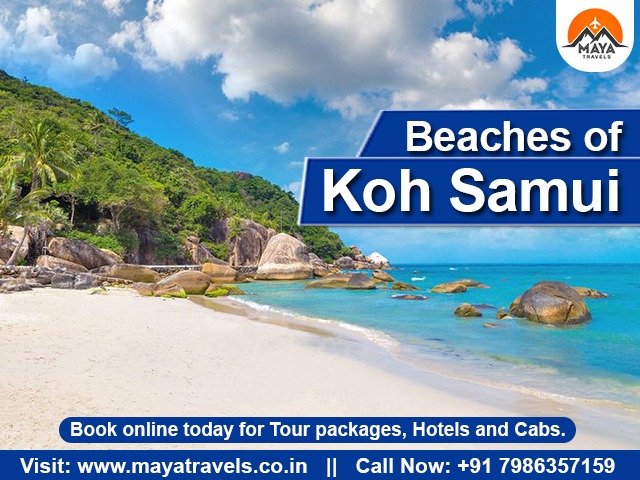 Koh Samui island is the country's second-largest island and home to some of the most beautiful golden coastline you'll find in Southeast Asia. Each beach on Koh Samui offers something different: some are ideal for peaceful isolation; others are filled with activities, water sports, and big crowds.

The island's biggest and busiest beach is Chaweng, where you'll also find the best shopping, plenty of attractions, and some of the nicest restaurants. The turquoise blue waters and palm trees dancing in the ocean breeze might explain why some of the island's best resorts are located here. 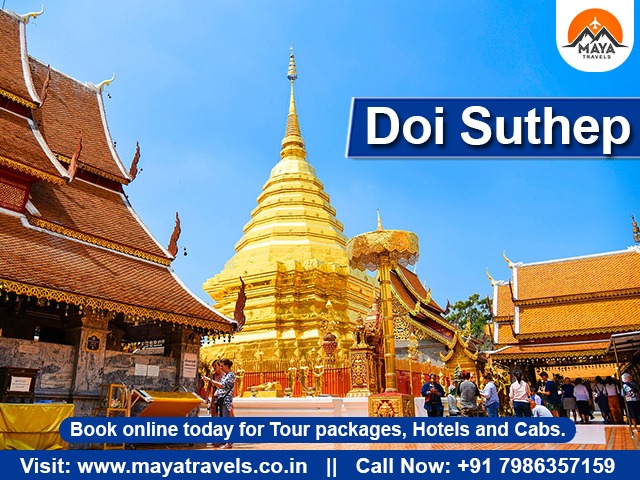 Perhaps the best-known wat in Chiang Mai sits atop Doi Suthep, a mountain overlooking Thailand's second-largest city. A favorite destination of devout Buddhist followers and travelers from all over the world, Doi Suthep is a marvel of intricate religious carvings – a visit here means seeing monks praying, witnessing worship rituals, and a chance to gaze out over the ever-growing sprawl of Chiang Mai city.

Just be sure to bring a bottle of water and your walking shoes – you'll have to climb a steep staircase to reach the top of the hill where the temple is. At the base of the stairs, vendors hawk everything from tasty local treats to goods handmade by villagers from the surrounding mountains. There's also a shop selling masks, elephant carvings, and home furnishings, so you can do some shopping while recovering from the trek up and down the stairs. 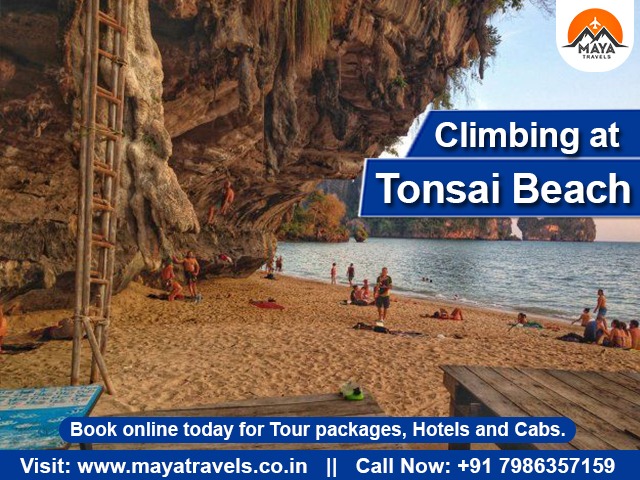 With its stunning limestone cliffs hugging sandy coastlines and turquoise waters, Thailand attracts plenty of climbers all year long – and while there are many destinations that offer stunning routes, Tonsai Beach has long been considered a climbers' paradise. One of the great things about climbing here is that you can just as easily climb solo or find a climbing partner or club once you arrive – and if you need a refresher lesson, that won't be a problem to find here either. 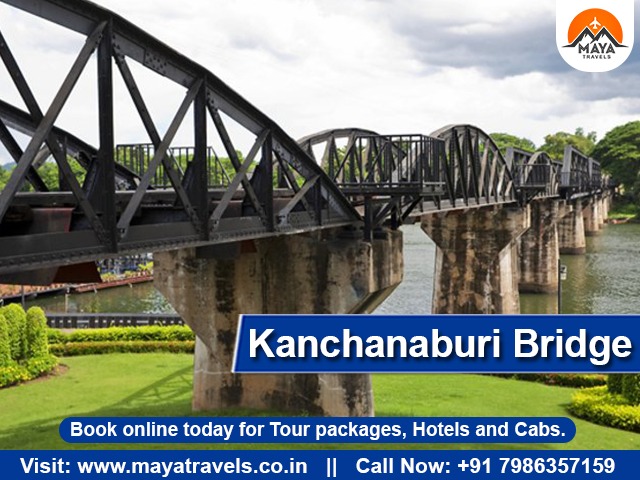 Better known to many as "the bridge over the River Kwai," the Kanchanaburi bridge is part of the Thai-Burma Railway that never came to be. During WWII, Japanese forces were intent on building a railway link between Thailand and Burma and used Allied prisoners of war (mostly British, Dutch, and Australian citizens) for forced labor. Over 12,000 Allied prisoners ended up dying during the one year the bridge was under construction – and reconstruction, like the bridge, was bombed and damaged more than once – leading to it being known as the "Death Railway." 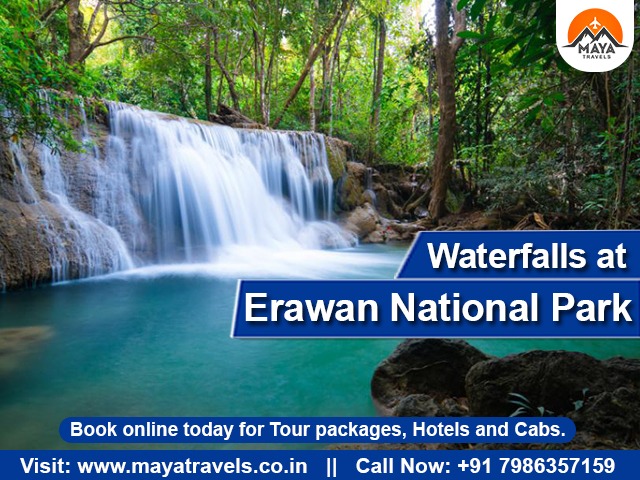 Erawan National Park has much to offer to visitors, including a number of caves; paths that cut through thick deciduous forests; and fauna that includes wild elephants, gibbons, and great hornbills. But it's the waterfalls here – and especially the seven-tiered Erawan Falls – that attract the bulk of the visitors.

The falls are named after the white elephant that travels with the Hindu god Indra because the tiers are said to slightly resemble the shape of an elephant's head. 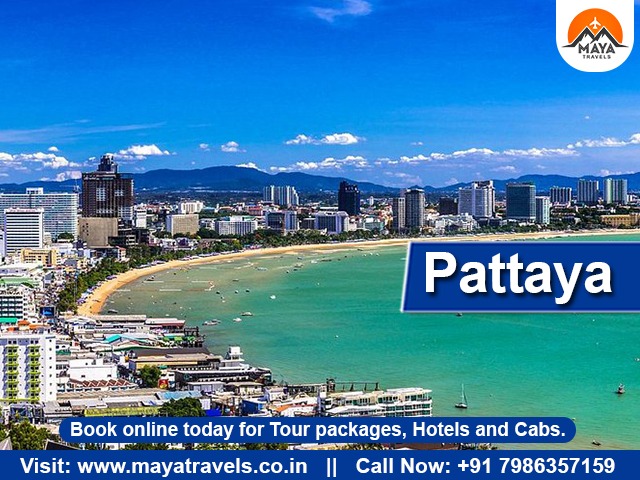 Once a quiet fishing village, Pattaya is now the closest beach getaway for Bangkokians, less than two hours away. While most visitors come here to escape the buzz of the Thai capital and soak up some sun, there's much more to do in this beachfront town.

Hat Sai Kaew (Diamond Beach) and Koh Samet beach are good places to start your visit–they're full of colorful food stalls, beach umbrellas, and stunning beach resorts. Koh Larn (Coral island) is famous for its glass-bottom boats that offer amazing views of the coral reefs, while Koh Larn Island is the prime destination for active pursuits such as parasailing and windsurfing. 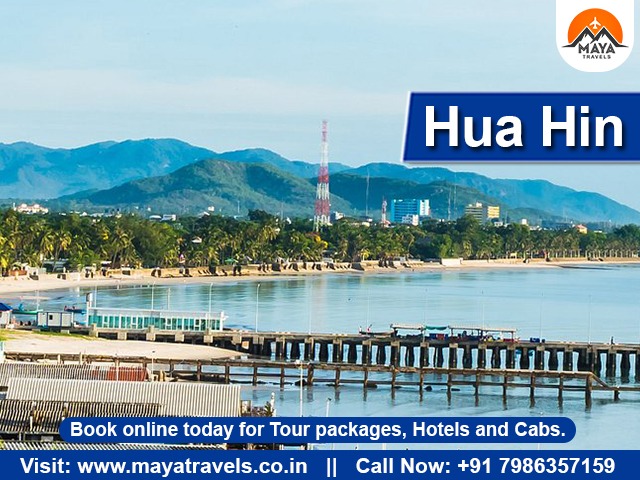 Once just a quiet town best known for being the king's summer retreat, Hua Hin has become a popular beach resort destination. Don't expect perfect turquoise waters or lively beach life here, though–this is more of a destination for those visiting with family or singles who want to sunbathe in peace, away from the crowds.

Aside from the central Hua Hin beach, you can try nearby Cham Am Beach or Khao Takiab beach, home to Khao Takiab temple and hundreds of wild macaques. Hua Hin is particularly popular in December and January when European tourists arrive here to escape their own freezing winter. 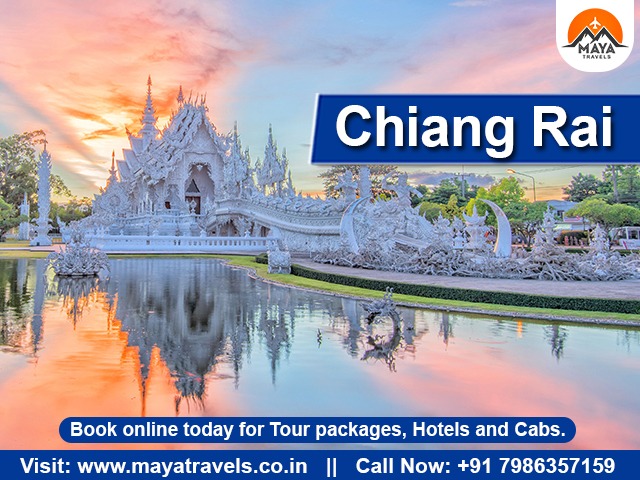 Sitting right on the border with Myanmar and Laos, the mountainous city of Chiang Rai is famous for its trekking in Lam Nam Kok National Park, with trails leading to stunning waterfalls such as the 70-meter-tall Khun Kon waterfall, lush forest, and hilltop tribe villages.

As with most Thai cities, temples are a huge attraction in Chiang Rai, with Wat Rong Khun (or White Temple) coming up at the top of the list. Wat Rong Khun is technically no longer a temple but a privately-owned compound redesigned and rebuilt by Chalermchai Kositpipat, one of Thailand's most famous contemporary visual artists. Another popular temple is Wat Tham Pla (also home to a cave and thousands of wild macaques), which can be reached by climbing a staircase flanked by the guardian Naga serpents.